All Collections
FAQs
60LoWireless System
What are the wireless performance considerations?

What are the wireless performance considerations?

Wireless technology continues to advance and shows no signs of slowing down. Wireless devices reduce installation times and make devices much more accessible. Unlike its wired predecessor, the ever-changing environment becomes the medium in which radio waves are transmitted. To keep your wireless devices working for you, consider the obstacles that wireless technologies must overcome.

Much like sound traveling through the air, radio signals fade exponentially based on distance. Distances between nodes should be considered in the design. Amatis connected devices act as nodes and have different communication ranges.

When possible, the Amatis Border Router (AMBR) should be located in a central location, allowing for the most direct links. The path loss for a 2.4 GHz signal in free space is given for several distances in the table below. 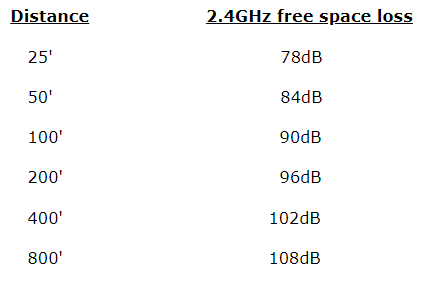 To better understand decibels (dB), every 3dB is equivalent to cutting the power in half. This means the power is reduced to 25% (6dB) at each interval above.

Wireless obstacles are rarely static. Weather can affect outdoor applications and closed metal doors or moving large equipment can affect indoor applications. These obstacles are often overcome but should be considered during design. Network managers prefer to house AMBRs in secure locations, such as a data closet. However, data closets and server racks are often lined with metal panels and cable troughs. When possible, mount devices away from metal, glass, or concrete obstacles.

Indoor applications will almost always encounter physical obstructions. Materials can have a sizable effect on radio performance. Although glass is easy to look through, glass often attenuates signals much more than most would assume. Glass is often coated with metallic, and is sometimes laminated. Below is a list of common construction materials along with typical attenuation values. The higher the attenuation value, the more the signal is likely to be reduced. 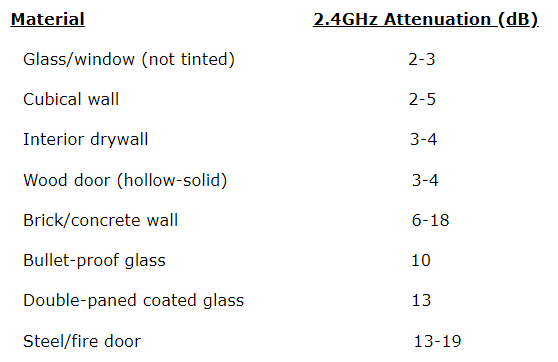 Amatis Controls’ 6LoWireless technology creates a mesh network that allows devices to hop through one another in order to transfer data. This mesh reduces single points of failure and shortens link distances when required. This strengthens the network routes as devices are added. As the number of hops increases, however, message latency increases. Also, if a device becomes an intermediate hop for many other devices, it can become a bottleneck in the system. These concerns become more prevalent in high bandwidth applications. 6LoWireless leverages the mesh topology while mitigating these effects using multiple metrics to determine the best routes through the network.

As the device count increases in a network, radio signal integrity will grow, however, traffic inevitably increases. Network traffic will also change based on enabled features, such as daylight harvesting. In order to have a scalable system, network traffic must be minimized, allowing room to grow. Typically with a 6LoWireless network, each AMBR is limited to 100 devices to keep network traffic manageable.

External noise sources include devices that emit frequencies in the network spectrum. Noise sources can result in more packet losses and require more messages to be sent. Avoid installing wireless devices near common sources of interference, such as microwave ovens, fluorescent lights, wireless cameras, and large power supplies. An RF spectrum analyzer is useful when looking for external noise sources. Using an RF spectrum analyzer prior to installation allows the user to select the best channel(s) in which to commission a system.

Wireless systems have many benefits, and consequently, they are here to stay. When implementing your Amatis system, do not be afraid of the obstacles, but instead be aware of them. By being mindful of the wireless environment, limitations, and solutions, you will have quicker successes and fewer callbacks.