All Collections
Manuals
Sensors
How do sensors work

How do sensors work

Understanding how sensors work is important for installers to know, to avoid poor installations.

The first is motion sensing, which is used to determine occupancy. The passive infrared motion sensor, located in the center of the sensor, detects motion through movement of objects that are a different temperature than the surroundings, like people. It uses 64 sensing elements, all aimed down out from the sensor in a 45-degree cone shape. If a person moves from one zone to another within the 64-zone grid, the sensor will detect motion.

When mounting the sensor for occupancy detection, it’s important to keep in mind the 45-degree cone coming out of the sensor. The sensor relies on a line of sight within this 45-degree cone. Any permanently fixed objects within this detection cone will block the sensor from detecting motion beyond that object. For instance, if you have the sensor mounted above a hanging projector, it could block any motion from being detected behind the projector. If you have low hanging fixtures that block part of the cone, motion will not be detected on the other side of that fixture from that sensor. 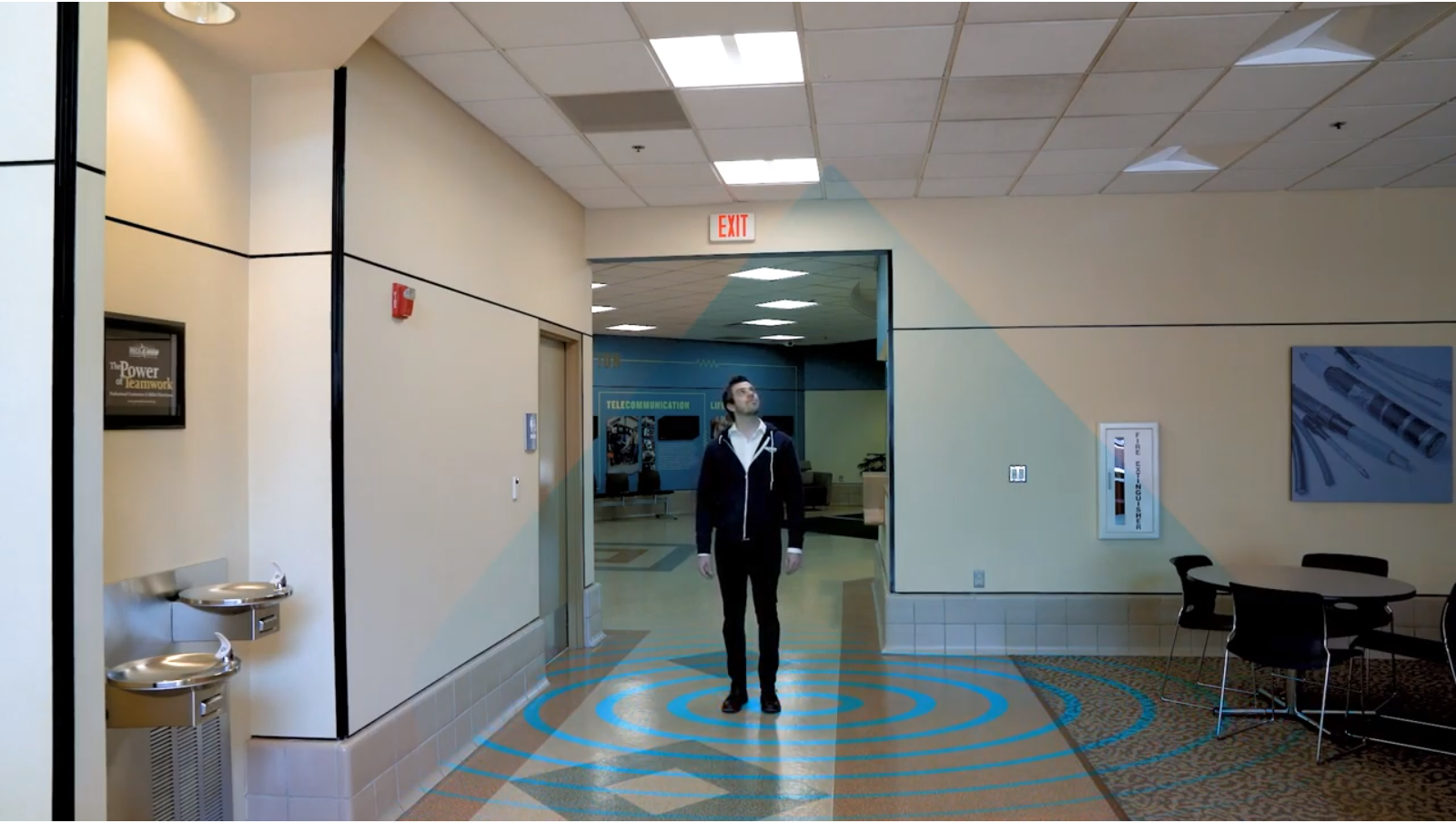 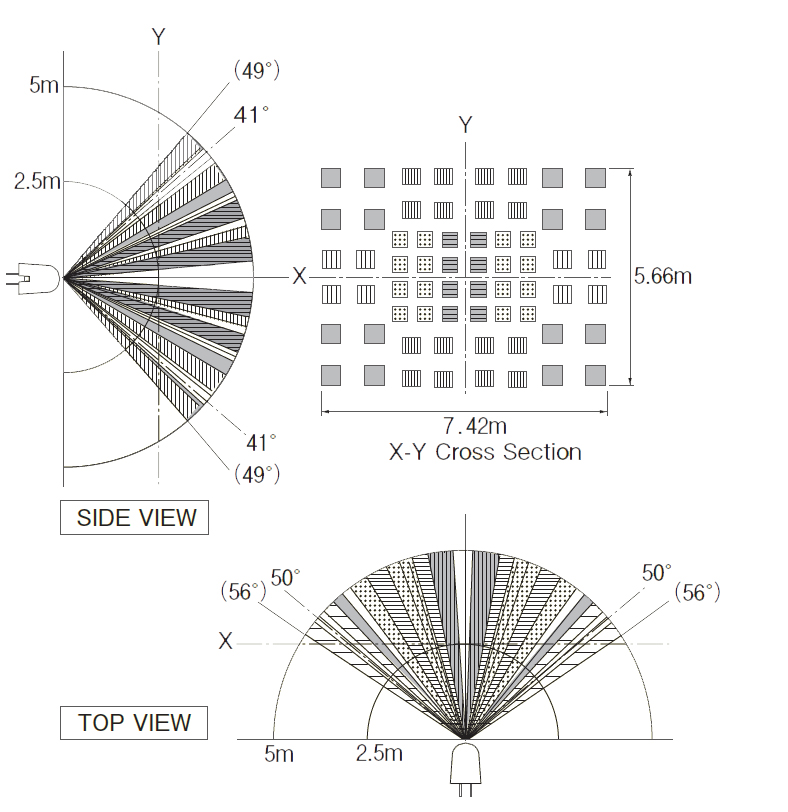 If a sensor is placed close to an open doorway or near it, motion on the other side of that doorway may be seen. An example of where this can be problematic is a small, unoccupied office with a sensor mounted in the middle of the ceiling and an open door. Motion in the high traffic hallway just outside the office may be detected, causing the lights in the office to remain on when they are not needed.

To help avoid unwanted motion detection, each sensor is sold with a set of blinders that can be used to restrict the sensing region of the occupancy sensor. 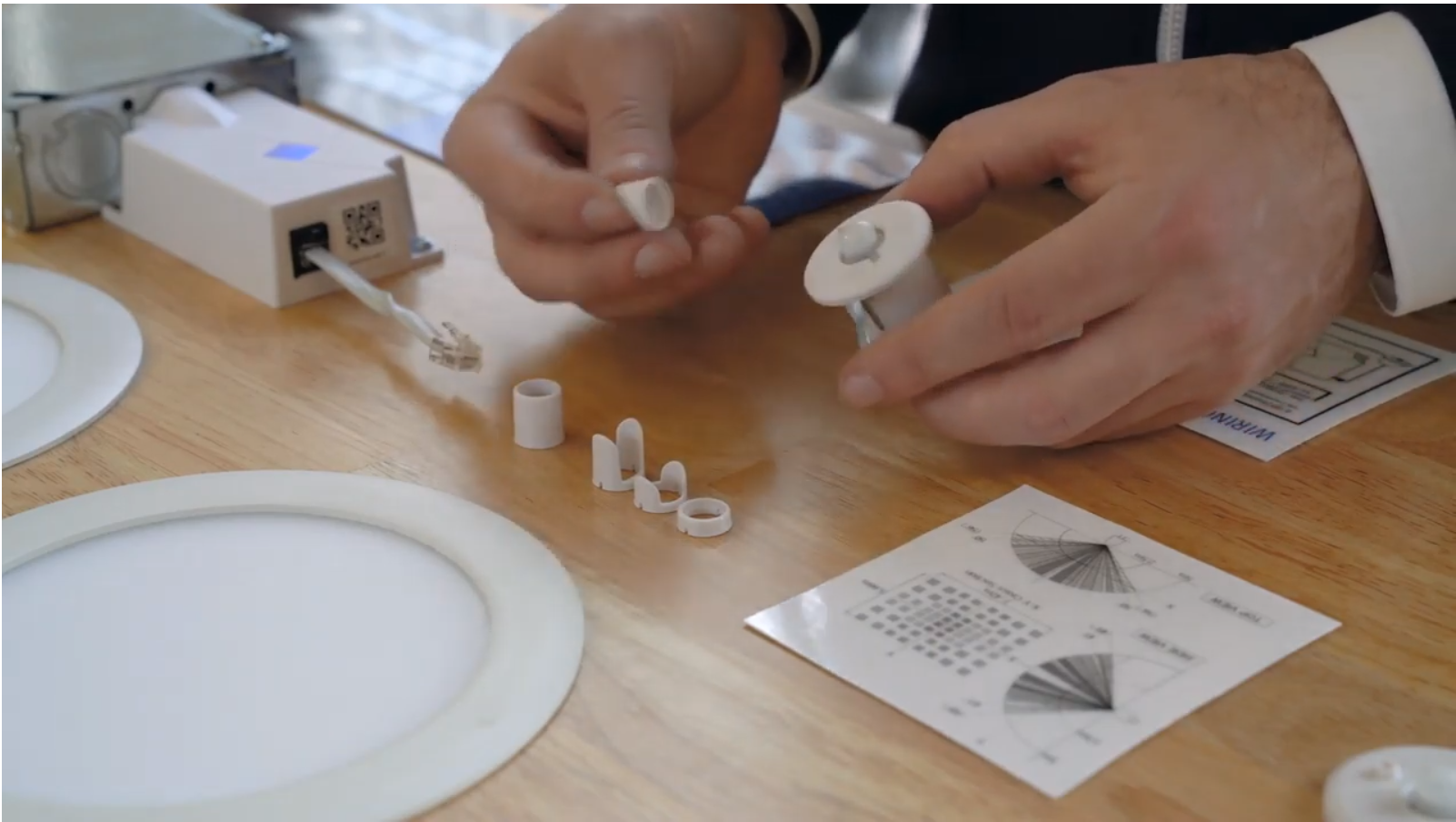 Next to the PIR sensor, you’ll notice an LED bulb that indicates occupancy detection. This bulb can be used to help optimize sensor placement after the system is powered on. When the sensor is powered and does not detect motion, this light is green. When motion is detected, this light turns orange. You can use this feedback mechanism to confirm occupancy detection where you want it, and not where you don’t.

Passive infrared can also not see-through glass, so any window or glass wall within that sensing region would block the motion from being detected on the other side of the sensor. Another consideration to make when installing PIR sensors is that the HVAC system, which emits warm and cold air, can trigger false occupancy detection if the sensor is placed within direct airflow from HVAC. It is best to keep the sensors more than 2 feet from HVAC vents.

The second sensing capability on our multi-sensor is ambient light. On the other side of the PIR sensor from the LED is a hole leading to the ambient light sensor. The ambient light sensor is to measure the light levels in the space below the sensor. This is useful near windows, where sunlight coming in can help offset the need for light from your fixtures, saving you energy, and allowing customers to operate in a more optimized, comfortable space. This energy-saving strategy is known as Daylight Harvesting.

The circuitry inside the sensor has 2 more integrated sensors detecting temperature and humidity. These sensors can help building owners gather a more clear understanding of their space, and can even be used to inform the HVAC system if the building owner chooses to connect the Amatis lighting control system to their building automation system through BACnet over IP.

The Level 2 Installation Training covers how sensors work and some helpful install tips.